A Change of Prearrangement is now up! 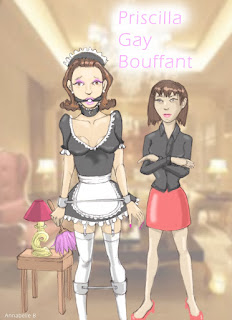 A Change of Prearrangement is now available exclusively here on this blog! Priscilla worked hard on this story of a strong willed young woman from a wealthy family looking to avoid a pre arranged marriage to a homosexual rich heir and looks to place her weak willed younger brother in her place, but as a girl! It works out since the male's parents also prefer a lady to marry their son as apposed to a same sex male marriage that would taint their family reputation!

Sample:
She was a very savvy businesswoman. Both Briand and Odette Marcoux trusted her faultlessly. So, as it was after dinner and during drinks, with both Pierre and Marie smoking a cheroot, that Marie launched into her proposal and discourse, on the future of Cordelia and Etienne as a married couple and the unification of the two, family fortunes.
“Well, I have to admit you are both cunning and thorough Marie. As for Etienne having any financial control, I’ll leave that up to you. I’m just happy to be able to save face as a father, and have my son married to someone who appears to be a female,” Briand smiled.
“That you and your mother, Colette, would sacrifice the manhood of Corneille in order to achieve this objective we all have, is commendable, Marie. Don’t you think so, Odette?” Briand asked.
“Oh, yes, absolutely darling. Yes. We save face. The fortunes are united through marriage, and safely taken care of by Marie. I just hope, Marie, that you can find a man to give you heirs, and grandchildren for your mother,” Odette intoned.
“We might be able to do something along those lines. As for Cordelia, well, she was never much of a boy, and would never have amounted to anything as a member of the male sex. She’ll be much better off as a bride, a trophy wife, a little homemaker and possibly a mother of adoptive children,” smiled Marie.

This story touches on many themes of feminization that I love and support, role reversal, identity change some bondage, and the idea of even maternity is involved in this story something that few writers do, but you have here. Priscilla created a story that is sure to get you hard or wet...

Link:
A Change of Prearrangement

Quote of the Week